The Fusion Solution in Hindfoot and Ankle

AUGMENT® Regenerative Solutions is a ground breaking technology in foot and ankle in arthrodesis surgery. The product is the first and only FDA approved alternative to autograft in ankle and hindfoot arthrodesis. Literature reports a range of 10% to as high as 41% of all hindfoot and ankle fusions fail to launch.* Can you predict which of your patients will result in a non-union?

What is AUGMENT® Regenerative Solutions? 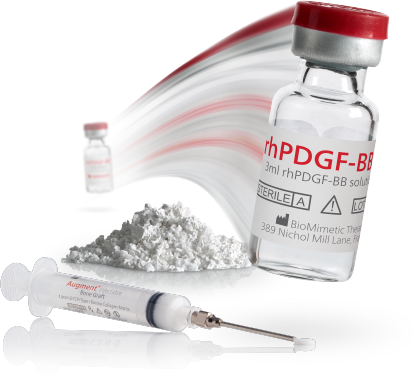 Both AUGMENT® Bone Graft and AUGMENT® Injectable are made up of two components.

How does AUGMENT® work? 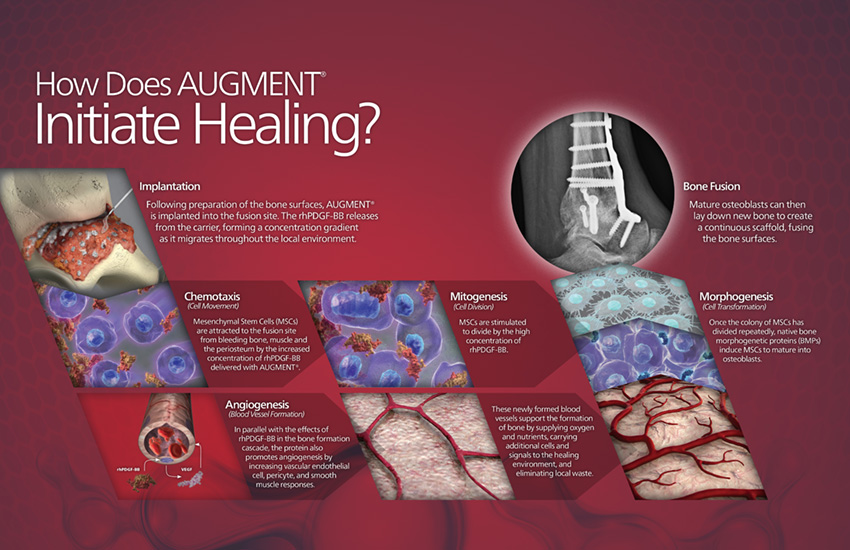 How do I use AUGMENT® Bone Graft?

AUGMENT® Bone Graft is supplied as a two component kit. Each kit consists of:

NOTE: Preparation of this mixture should be done at least 10 minutes before implantation in the joint space(s) intended for arthrodesis because it requires this time period to saturate. Please plan accordingly.

First open the cup and transfer the β‑TCP granules to a separately available sterile surgical bowl.

Then using a syringe and needle, draw up the liquid contents of the vial in its entirety (the rhPDGF-BB solution). Transfer all of the fluid to the surgical bowl containing the β-TCP granules.

Using a spatula, curette, or similar instrument, gently stir these two components together for approximately 30 seconds to ensure a homogeneous mixture. This mixture should, at that point, have the consistency of wet sand.

The rhPDGF-BB saturated graft mixture should be left undisturbed for 10 minutes before being implanted to ensure optimal saturation of the β-TCP particles. Ensure that the entire volume of both components is combined. The product should be implanted within one (1) hour of mixing the two components.

Immediately prior to implantation, the entire contents should be mixed briefly again to ensure complete saturation of the β-TCP particles.

AUGMENT® Bone Graft should be implanted on already prepared host bone surfaces, being careful not to overstuff the joint space(s). This material should be inserted amongst all peri-articular defects (both pre-existent and surgically created). This will maximize bony apposition but not impede direct host bone to host bone apposition.

Irrigate and then remove all fluid from the surgical site one final time after joint preparation is complete and immediately prior to AUGMENT® Bone Graft implantation.

Assess the fusion site. Determine where all the bony defects (e.g., subchondral voids and surface irregularities) are which will need to be filled with AUGMENT® Bone Graft.

Care should be taken to ensure that all AUGMENT® Bone Graft material is contained within the perimeter of these bony defects and that the graft remains saturated during the surgical procedure.

REMEMBER: It is important to ensure that all bony defects are grafted. Adequate graft fill is needed to optimize results with any grafting material.

NOTE: Overfilling or “overstuffing” of the joint space with this material is unnecessary, and should be avoided, particularly to the extent that direct host bone to host bone apposition is prevented. In order to achieve adequate closure and containment of the material, however, it is imperative that the material be contained with a meticulous soft tissue and capsular closure. This will keep the material from the surrounding soft tissue, in order to achieve appropriate containment within the desired peri-articular site.

Hydrate the implant site with any remaining rhPDGF-BB solution, if desired.

Following satisfactory joint reduction and hardware fixation of the arthrodesis site(s), any remaining (unused) AUGMENT® Bone Graft should be packed around the external perimeter of the treated joint(s).

How do I use AUGMENT® Injectable? 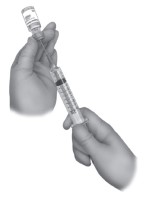 Completely withdraw the contents of the vial containing the rhPDGF-BB solution using the empty syringe and 18G beveled needle. Displace any air remaining in the syringe. 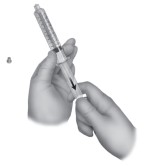 Remove the cap from the syringe containing the β-TCP/ collagen matrix. Pull the plunger to the 10mL mark and tap the syringe barrel to loosen the matrix.

After hydrating the matrix, transfer the contents back and forth between the two syringes for no less than twenty (20) cycles to form a homogeneous paste. Note: A cycle is defined as passing the matrix to the empty syringe and back.

Disconnect the empty syringe and female-to-female luer lock connector from the syringe containing the paste. 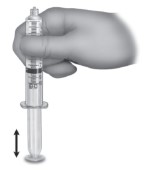 Hold the syringe barrel and gently tap (vertically) onto the plunger end to shift the paste toward the plunger seal, then express any excess air (without displacing product).

Connect the 14G blunt cannula and dispense the paste into the graft site.

Using the prepared syringe (see AUGMENT® Injectable Preparation section, above), dispense the hydrated matrix into the void. Note: It may require an initial force to get the paste to flow through the 14 gauge needle. However, once the paste starts to flow, the force required to maintain a flow will be reduced.

Carefully apply the hydrated matrix to the surgical site (i.e. the subchondral voids, and surface irregularities visualized throughout the entire joint) such that the graft material is in contact with the entire osseous surfaces to be fused/repaired while allowing rigid fixation and primary bone contact to occur between the osseous surfaces. Immediately after joint reduction and hardware fixation of the fusion site, any remaining (unused) AUGMENT® Injectable should be applied around the external perimeter of the fusion construct.

Remember: It is important to ensure that all bony defects are grafted. Adequate graft fill is needed to optimize results with any grafting material.

Once AUGMENT® Injectable has been applied to the defect site, carefully layer periosteal and overlying soft tissue to enclose and contain the graft material.

Care should be taken not to irrigate the graft site following implantation of AUGMENT® Injectable.

Any remaining graft material should be discarded.

Step 6 - Fixation of the Joint

AUGMENT® Bone Graft and AUGMENT® Injectable are indicated for use as an alternative to autograft in arthrodesis (i.e., surgical fusion procedures) of the ankle (tibiotalar joint) and/or hindfoot (including subtalar, talonavicular, and calcaneocuboid joints, alone or in combination), due to osteoarthritis, post-traumatic arthritis, rheumatoid arthritis, psoriatic arthritis, avascular necrosis, joint instability, joint deformity, congenital defect, or joint arthropathy in patients with preoperative or intraoperative evidence indicating the need for supplemental graft material.

AUGMENT® Bone Graft and AUGMENT® Injectable should not:

As with all therapeutic recombinant proteins, there is a potential for immune responses to be generated to the rhPDGFBB component of AUGMENT® Bone Graft and AUGMENT® Injectable. The immune response to rhPDGF-BB was evaluated for AUGMENT® Injectable in two studies, and for AUGMENT® Bone Graft (which contains the identical rhPDGF-BB) in two pilot and one pivotal study for ankle and hindfoot arthrodesis procedures. The detection of antibody formation is highly dependent on the sensitivity and specificity of the assay. Additionally, the observed incidence of antibody (including neutralizing antibody) positivity in an assay may be influenced by several factors including assay methodology, sample handling, timing of sample collection, concomitant medications, and underlying disease. For these reasons, comparison of the incidence of antibodies to AUGMENT® Bone Graft or AUGMENT® Injectable with the incidence of antibodies to other products may be misleading.

Women of childbearing potential should avoid becoming pregnant for one year following treatment with AUGMENT® Bone Graft or AUGMENT® Injectable. The implantation of rhPDGF-BB in women and the influence of their development of anti-PDGF-BB antibodies, with or without neutralizing activity, on human fetal development are not known.
The safety and effectiveness of AUGMENT® Bone Graft or AUGMENT® Injectable in nursing mothers has not been established. It is not known if rhPDGF-BB is excreted in human milk.

The safety and effectiveness of AUGMENT® Bone Graft or AUGMENT® Injectable has not been established in anatomical locations other than the ankle or hindfoot, or when combined with autologous bone or other bone grafting materials.

The safety and effectiveness of repeat applications of AUGMENT® Bone Graft or AUGMENT® Injectable have not been established.

The safety and effectiveness of AUGMENT® Bone Graft or AUGMENT® Injectable in pediatric patients below the age of 18 years have not been established.
AUGMENT® Bone Graft or AUGMENT® Injectable do not have any biomechanical strength and must be used in conjunction with standard orthopedic hardware to achieve rigid fixation.
The β-TCP component is radiopaque, which must be considered when evaluating radiographs for the assessment of bridging bone. The radiopacity may also mask underlying pathological conditions. Over time, the β-TCP is intended to be resorbed at the fusion site and replaced by new bone. Under such circumstances, it would typically be indistinguishable from surrounding bone.